Finding work while travelling around Australia, living full time in our caravan on the road was always going to be our biggest challenge…

And I think we both had a small part of us that felt that until we had secured a job and subsequently moved on again, that maybe this dream life wasn’t really happening.

So I think that finding work while travelling around Australia came upon us a bit sooner than we expected, due a little bit to this fear, plus a decent hit to our budget from damage to our van caused by the wheel blowing out on our way to Uluru. After all, we’d only been on the road for about 7 weeks by that stage!

But, while we were in Alice Springs in October, getting repairs done to the van, and before we headed further north into the real outback we thought we’d have a bit of a look at what jobs were available. We were also keeping in mind that if we continued north we were heading into the hottest and wettest part of the year so perhaps staying central might be a better option for our first summer away. We were particularly interested in looking for jobs for couples but at this point we hadn’t even considered finding jobs on outback cattle stations. 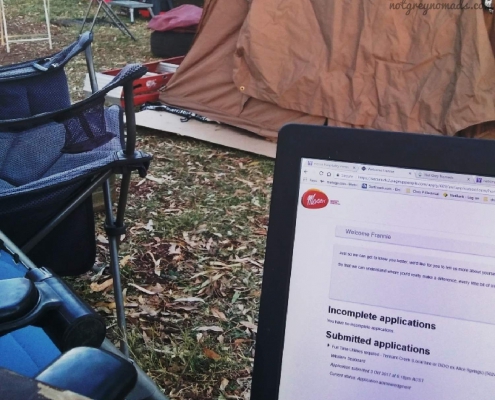 We were both willing to give anything a go, but we had to be mindful of a few things. Crispy still hadn’t worked since his back surgery at this stage, and while he felt much fitter, the last thing we wanted was to do anything that could do any damage there. As always we had Bella to consider too. Would we be leaving her unattended all day, coming into the really hot summer? Was there any way around that?

Traditionally we would’ve looked for work through seek.com.au but once I started looking I realised that the bulk of what was advertised through there, was real, career-oriented positions. Long-term jobs for ambitious people who have specific qualifications who really want to go places, as opposed to people like us, actually out there, going places.

We knew the work was out there.

We found talking, and being really honest about what we were doing and what we hoped to get out of life, made people understand who we were and what we were all about and we had offers and suggestions and contacts and business cards given to us in the most random places.

There is so much work available in Central Australia for people with the right attitude, it’s not funny!

We had a guy, who we had asked if he could take a photo of the three of us at the NT border, tell us to call his brother-in-law when we got into town. When we got new tyres put on the van, the guy at Tyrepower asked Crispy if he knew how to fit a tyre, and he said he was a fast learner, and the guy said he’d had two people not show up for work that day, did he want a job? I got chatting to the lady at the optometrist about our plan and our lifestyle while Crispy was having his eyes checked, and she told me to come back in when I was ready to look for work and she’d see what she could do.

We were pretty amazed and excited. People knew we were only looking for something short term, but they could see we were having a go and they were willing to give us a go in return. We’ve found now a lot of places are like that.

Our ideal gig would be something that meant we were both employed, together as a couple. Having recently read a fantastic blog post by Fulltimecaravanning.com.au about their 3 months as a Bore Runner, we thought hey, maybe that’s something we could do! Before that, neither of us had a clue what a Bore Runner even was. (Read their post for a great explanation of what the life of a Bore Runner is like!) 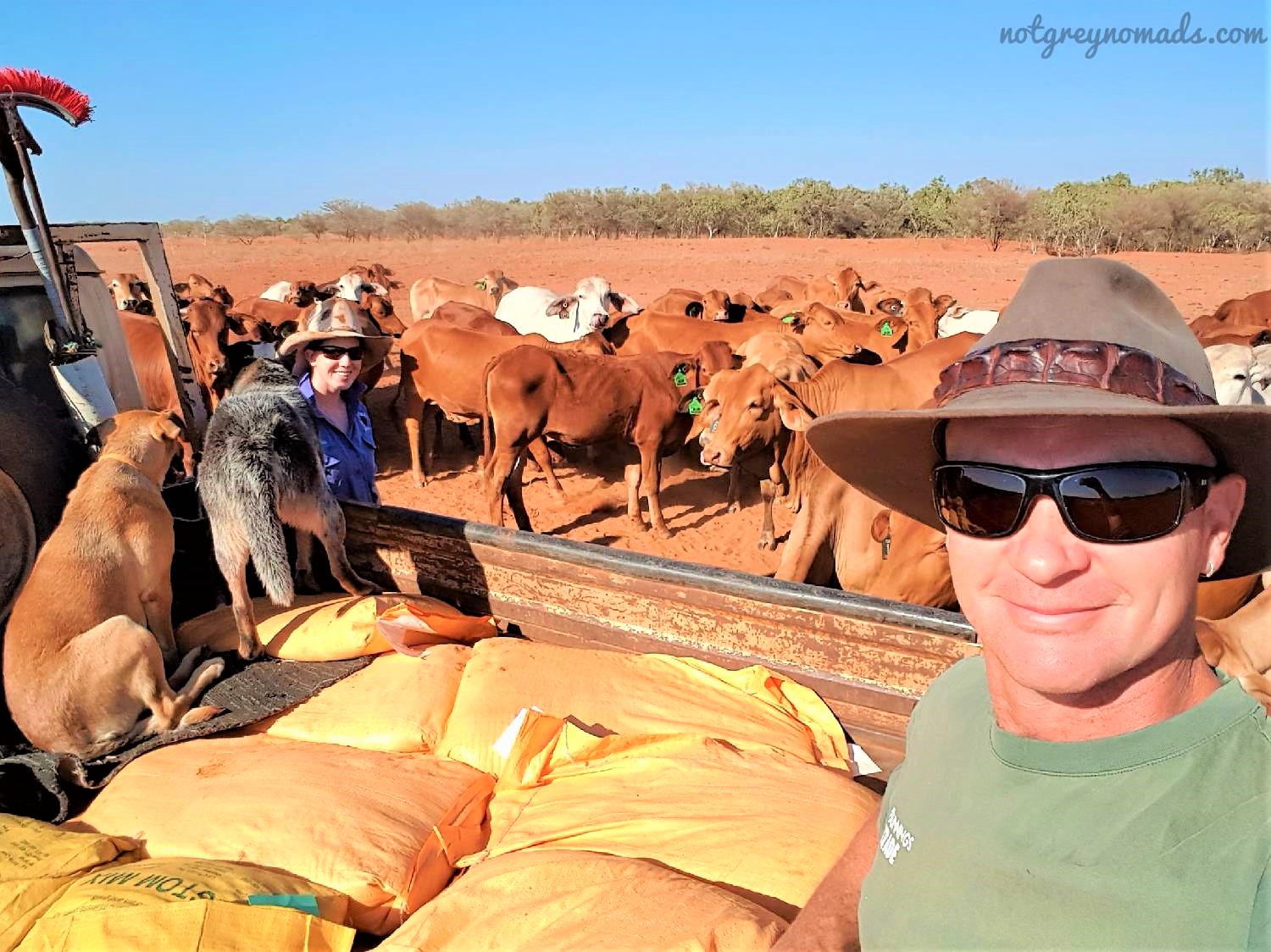 On our station, Station Hand was probably a better description as Crispy really had to be able to turn his hand to anything that needed to be done on the station. But in general, a Bore Runner’s job is to drive the property, to locate the many bore water pumps and make sure the pumps are working and the cattle, tanks and waterholes are getting enough water. Across the heat of summer, and with the immense size of the cattle stations that alone can be a fulltime job for a couple of people.

Both happy to spend our day driving and with at least a basic mechanical mind, we figured this could be something either of us could do, even considering our physical limitations of me being a total weakling and Crispy not wanting to hurt his back anymore.

The good thing is a lot of farms and stations are happy to put on people with little or no experience, as long as you are willing to learn, willing to work hard, and especially if you are somewhat mechanically minded. 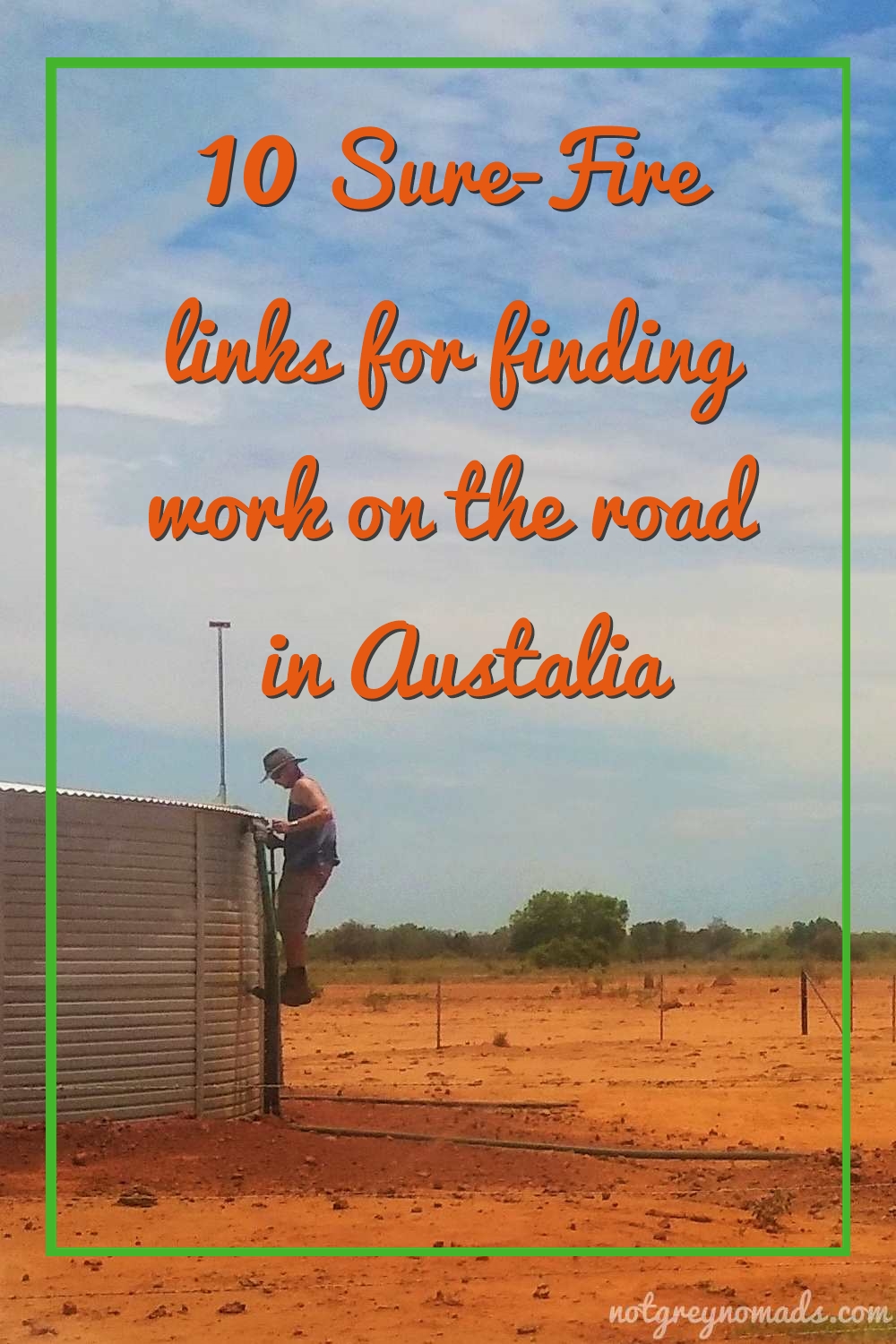 It’s important also to able to handle the practicalities of remote living, like if something breaks down, it can be a long time until you can get someone to fix it, so you’re better off seeing if you can learn to fix it yourself. You don’t just have a supermarket or Bunnings or even a chemist just down the road either. But many things, like how to look out for sick cattle or how to mend fences can be taught on the job. These places often have work for couples travelling Australia, and jobs for families too.

Check out this post for some of our pics and stories from our time at Epenarra Station.

So, What are our top tips for finding work while travelling around Australia?

We started to discover the many many Facebook groups out there that specifically advertise jobs for travellers like us such as:

**BONUS LINK – if you go to greynomadsjobs.com you’ll be able to register directly with them so employers can see your resume, AND you get advance emails to advise of new job listings before they get posted in the Facebook group! Its FREE to register!**

A lot of remote places rely on travelling workers, and  there are many who look to employ backpackers specifically, there are just as many who can see the benefits of employing fit, reliable, hard working mature couples who are more about lifestyle, adventure and new experiences, than careers or ambition (or visa status!)

A good Facebook group will have a large numbers of members and recent activity or posts, and you will soon find too many jobs in your news feed to apply for!

Gone are the days of the newspaper classifieds, that’s for sure.

Usually, every town you come to will also have a local Facebook community group of some sort and they can be a great way to find local businesses that are looking for staff. Mt Isa Jobs and Vacancies is an excellent example, with so much variety popping up in that whole region. Even “Work wanted” ads can be a successful way to put feelers out if you are prepared to give anything a go! 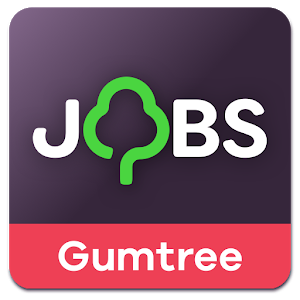 Ultimately though, we found our job through Gumtree. This is another fantastic place to look for shorter term positions and jobs where people are looking for the right attitude rather than qualifications or experience. 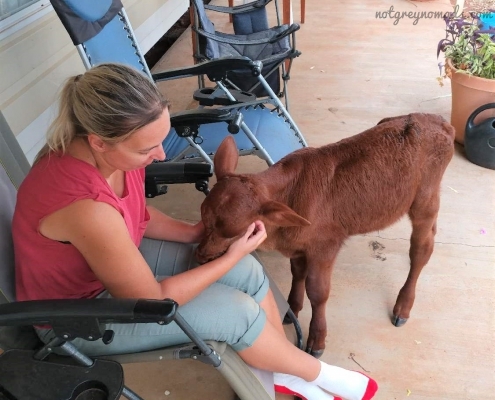 Remember, just because it’s what you’ve always done, doesn’t mean it’s what you always have to do. You can look at jobs outside your normal field of work if you think to yourself “What CAN I do?”, rather than “What do I already have experience in?”

Before we left home, my biggest fear was that finding work while travelling around Australia was a myth, but we most certainly haven’t struck that in Central Australia and North Western Queensland. All the people we worked with at the station were all other full-time travellers who have been doing it a lot longer than us and have had some fantastic jobs along the way.

Talking to other travellers gives you some great ideas about where to look for opportunities, and we now have this fantastic experience and a whole bag full of new skills under our belt to take with us into our next adventure.

Enjoyed reading this? Check out our webpage, or read our post on how we got started on this amazing adventure here…

What’s Next for Not Grey Nomads?